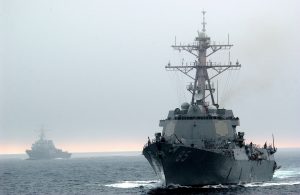 Ensign Emily McMenamin, a sister of Abilene Christian University graphic designer Amy Ozment, emailed her family Monday night to let them know she was OK.
A CE division officer, McMenamin is stationed off the coast of Yokosuka, Japan, on the U.S.S. McCampbell, a Navy destroyer in the 7th Fleet. Not far away are the areas in northern Japan hit hard in recent days by earthquakes, a tsunami and damage to nuclear power plants.
The ship’s namesake is the late Captain David McCampbell, the Navy’s leading aviator in World War II.
As world citizens struggle with how to help the desperate situation they see on TV and Internet, we find it inspiring that U.S. military personnel such as those on the McCampbell are responding in these ways:

“Our entire crew is safe as well as family members back in Yokosuka. We saw little to no impact out on the water. In port there were some rocking ships on the pier but not too much damage. We were all extremely lucky. Further north in Japan is where they saw most of the destruction. You all have probably been able to see more of this than I have. Sometimes it feels like the news channels know more than we do about the situation.
“The same day that the tsunami hit, the Navy changed our objective … The response time was pretty incredible. The Navy immediately redirected ships to the main area of destruction for search and rescue missions. I have watched similar circumstances in other disasters on the news while sitting at home before, but it has never felt like this. Now it is my home that has been struck. So many of the people who work on our ship have been in Japan for years and many have family who live here. It really struck close to home for so many people. We don’t know exactly what our plans will be for the coming days and what the schedule will look like, but there is definitely nowhere else our crew would rather be.
“With thousands still missing and even more homeless [and] left with nothing, it looks as if this will be the focus of most of us out here indefinitely. We will be continuing search and rescue missions as well as providing supplies, food and clothes as much as we can. Last night when our C.O. got on the announcement system and told this to the ship, he [said] that any donations would be taken to shore by the helicopter crew, and that we should do as much as we could with the resources we have available. … Aircraft from all the ships [are] providing relief and … surveying the damage and situation ashore. There are thousands upon thousands of people stranded, trying to stay warm and find food out in open fields. Their homes have been destroyed and they have nothing more than the clothes on their backs in many cases. Knowing this, our crew of less than 300 donated enough clothes, blankets and food to fill the mess decks last night. In less than hour of knowing that we would be remaining in the area to provide assistance, the entire crew was up and running … bundling blankets, clothes, shoes and food. It will take trips to shore all day to get it all off the ship.
“I watched sailors give up all the civilian clothes and shoes they had on board, so that maybe one person ashore could have something warm and dry to wear. Additionally, blankets, sheets and pillows were given up with the sentiment that we at least have somewhere warm to sleep and that someone on shore needs these things much more than we do. [More than] $8,000 [was donated] by our crew. This will be such a small dent in the overall disaster relief but was such an incredible thing to witness. There was not a person on board who was not contributing in some way last night. It was a heart-warming thing to witness and reaffirms my faith in the good of humanity. We may not be a large ship or crew, but it certainly can be said that the McCampbell crew, as well as the other crews out here, will be doing everything they can to provide assistance to the Japanese amidst the devastation.
“I have spent so much time the last year trying to figure out where I was headed and why I am where I am. I know now that I am exactly where I should be. I have so much to learn every day, but am truly enjoying the work. It is at times stressful and exhausting, much like any other job, but I know that we are doing something important.”

Because of the nature of their missions, the McCampbell crew can’t always tell relatives and friends where they are stationed, so their service goes unnoticed by most.
We ask our military to make myriad sacrifices, even their lives, to protect us and others. No one expects them to give their money, food, bedding and clothes away as well. We should all feel as humbled as we are protected by such selfless men and women.