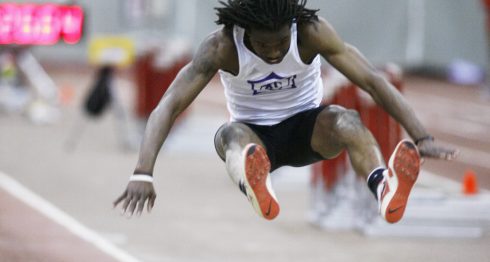 Quality performances from the only four Abilene Christian University student-athletes to qualify for the 2011 NCAA Division II indoor national championships were enough to make history for ACU yesterday in Albuquerque, N.M.
Amos Sang (mile, 5,000 meters), Ramon Sparks (triple jump), Nick Jones (shot put) and Desmond Jackson (60 and 200 meters) may as well have had Superman capes atop their uniforms, because the four Wildcats scored 49 of a possible 60 points to capture yet another national title for their university.
Despite having zero points heading into Saturday’s final competition, ACU zoomed to the top of the scoreboard, with Sang’s win in the 5,000-meter run sealing the Wildcats’ record 13th NCAA indoor national title. It was ACU’s 53rd NCAA title overall in track and field, more than any other institution. The Wildcats have won 63 overall national team championships, none more improbable than this one.
Only those who have met or surpassed pre-determined qualifying standards in each event during the 2011 indoor season can participate in the indoor national meet. ACU’s four competitors are believed to be the fewest to ever win a team title at this meet.
Read more here.