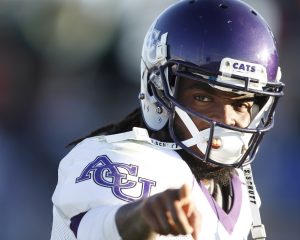 Thanks to a pair of shoes reportedly borrowed from a former teammate now starring for the Chicago Bears, former Abilene Christian University standout Edmond Gates turned in the second-best 40-yard dash time today among players in Day 2 of the 2011 NFL Scouting Combine.
The all-America athlete from Vernon, Texas, ran 4.37, a time matched by Fort Valley State’s Ricardo Lockette. University of Maryland running back Da’Rel Scott had the fastest time at 4.34.
Gates also recorded the second-best overall performance in the Combine’s broad jump event, leaping 10 feet, 11 inches (Alabama’s Julio Jones was first at 11 feet, 3 inches) and had the seventh-best vertical jump (40 inches to Nevada tight end Virgil Green’s 42.5). Gates is still recovering from a groin strain suffered during practice for the Senior Bowl that makes his performance today all that more impressive.
A senior, Gates helped lead ACU to an 11-1 record in 2010 and its second Lone Star Conference South Division championship in three years. He had 66 catches for 1,182 yards and 13 touchdowns, becoming just the seventh player in Wildcat history to break the 1,000-yard receiving mark and the fifth player to have more than 60 catches in a season. Gates ranks second in career receiving yards (2,885), third in receptions (158), is tied for first in touchdown catches (27) and is fourth in scoring (194 points).
Johnny Knox (Chicago) and Bernard Scott (Cincinnati), current NFL players from ACU, increased the odds of their draft-worthiness in 2009 with outstanding performances in the Scouting Combine. Scott is Gates’ cousin, and according to this report on the Bengals’ website, Gates borrowed a pair of shoes from Knox for the Combine.
The loan may pay off handsomely for Gates at the 2011 NFL Draft, which begins April 28 in New York, N.Y.
Reports are his draft stock is rising steadily. Sam Farmer, a sportswriter for the Los Angeles Times wrote, “Good thing the combine isn’t held at Cowboys Stadium. Gates might have bumped his head on the video board.”