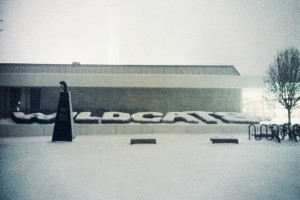 Saturday morning sunshine and temperatures headed for the mid-40s this weekend are just what the doctor ordered for Abilene Christian University, whose campus was socked in by winter weather for a likely record four straight days this week.
The university was closed Tuesday-Friday after a fierce Monday night snow and ice storm roared through Texas, effectively bringing much of the state to a standstill all week. At ACU, only the McGlothlin Campus Center and its World Famous Bean cafeteria and Hilton Food Court were open, which severely limited the places its 2,000 or so freshmen and sophomores could venture.
By Friday, “There was beginning to be a bit of anxiousness and restlessness among the guys,” said Mabee Hall residence director Byron Martin. “But overall, I think they have handled it pretty well.”
Martin said ACU’s Residence Life Education and Housing staff stepped up its schedule of special programming during the week to help take students’ minds off their predicament. Organized visitation hours were expanded to give students opportunities to be together because typical gathering places such as the Learning Commons in Brown Library, atriums in academic buildings and local restaurants were closed. Besides the poor footing and roads-turned-into-skating-rinks, outdoor activities were curtailed by winds gusting to 40 miles per hour, temperatures in the teens and below-zero wind chills – Abilene’s coldest sustained weather in almost 30 years. Lobbies of the residence halls have big-screen TVs, but are not spacious enough to accommodate large numbers of students bored with Facebook and wanting to socialize in person.
“We had to give them something positive to do, to help keep them off the roads,” said Martin. “It was hard for them to even walk to the other side of campus. We brought in pizza and smoothies, had movie nights, organized a Hawaiian luau with Gardner Hall.”
Across campus, it took Nelson and McDonald Hall resident director Shannon Buchanan three hours to make a normally short shopping trip to Walmart to buy snacks and other supplies to help her women make it through the rest of the week. She and her staff of resident assistants had four special programs scheduled for two days late this week, including a Valentine’s Day card-making party. A Super Bowl party was being planned for Sunday afternoon.
The Campus Center’s hours were trimmed to 7 a.m. to 9 p.m. (rather than 11 p.m.) so the staff could get home safely on the ice-packed roads, said director Joel Swedlund (’02). He said only 35 students trekked through the snow for breakfast in the Bean on Tuesday morning, but numbers grew steadily throughout the week.
Because food delivery was stalled by the treacherous road conditions, the Bean couldn’t offer its usual wide variety of menu items, and some students began to tire of the less expansive offerings.
Around town, many Abilenians were in the same boat unless they had time to visit a grocery store and stock up on food before the storm hit. Once it blew through, even Abilene Police Department patrol officers were forced to abandon their Crown Victoria cars for 4×4 and other off-road-worthy vehicles from the city motor pool, as many streets became impassible. Flights in and out of Abilene Regional Airport were cancelled for several days, and the National Weather Service office went offline because its equipment was damaged and repair crews couldn’t reach it.
Tom Craig (’89), director of student productions, said anxiety increased among some clubs and classes because they lost up to three days of practice for their Sing Song performances later this month.  “Some pockets of students on campus still prepared in some form or fashion for the show,” Craig said. “Because all other major buildings were closed, there were no places where they could congregate in large numbers. But we didn’t want to put them in situations where they had to drive, or would otherwise be at risk.”
A burst water pipe in Zellner Hall shut down the university’s email and Website servers for a time on Thursday, but crews restored the service by that evening.
Life should return to normal this weekend, as melting has begun in earnest. Further east, the Metroplex received a second knockout blow when a Friday snowstorm dumped up to 8 inches of snow on top of icy roads and complicated preparations for Sunday’s Super Bowl XLV in Arlington. But Abilene appears to be on the rebound.
Athletics schedules for the Wildcat basketball, baseball, track and field, tennis and softball teams were disrupted by the weather, but you can catch up with the changes here. ACU is scheduled to host baseball games Sunday afternoon and Monday to open its 2011 season.
The staff of the student-run Optimist newspaper thoroughly covered the storm, and even published an issue it hand-delivered to residence halls. Kudos to them as well as the hardy staff of ACU’s Police Department, dining services, information technology and Student Life Office who kept everyone safe, warm and informed during a week we will be talking about for some time to come.