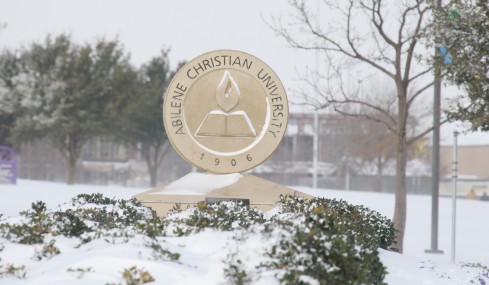 Less than 12 hours after basking under a bluebird sky and near 70 degrees of glorious late-winter warmth on Monday afternoon, the Abilene Christian University campus is closed today.
Mother Nature threw most of her bag of meteorological tricks at West Texas in a wild overnight of rain, thunder, lightning, hail, sleet, snow and wind, leaving behind about half a foot of ice and snow this morning. The late-winter storm winding up in the southwestern plains promises to be a historic one for about a third of the United States in the next few days.
The McGlothlin Campus Center and World Famous Bean are open to serve students, but foot traffic is hazardous at best, and driving strongly discouraged by the ACU Police Department.
It is currently 12 degrees with wind chills below zero, thanks to arctic winds gusting up to 40 mph, which is no weather for the Wildcats to play their season-opening baseball game today with St. Mary’s University in San Antonio. The game has been rescheduled for March 1.
That leaves ACU’s actual season opener for this Friday in Abilene, when head coach Britt Bonneau’s team will host University of the Incarnate Word at 4 p.m.  A lot will have to change by then, however, as the weather forecast says the Big Country will not see temperatures above freezing until Friday afternoon, with nighttime lows in single digits.
You can see other photos of the campus under its current coating of white here.