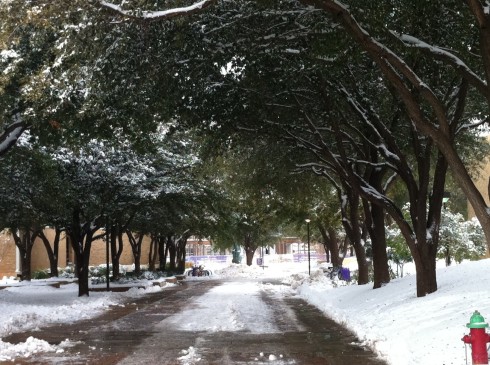 Abilene Christian University officials decided Tuesday night to close the ice- and snow-bound campus Wednesday for a second consecutive day.
Tuesday’s high never exceeded 18 degrees, and Wednesday’s is expected to top out near that again, with single-digit lows expected both nights and wind chills at or below zero. Roads in Abilene and around the Big Country are still packed from a half-foot of snow and ice that fell between late Monday night and Tuesday morning. Snow drifts one to two feet deep are common in the region.
The Texas Department of Transportation and Department of Public Safety are discouraging travel, especially on Interstate 20, citing numerous closings and accidents. Some stretches of highway are impassable because of ice or stranded vehicles. Abilene Regional Airport announced Tuesday morning that all incoming and outgoing flights had been canceled.
Temperatures are not expected to rise above freezing until mid-day Friday.
The McGlothlin Campus Center and World Famous Bean remain open, but Brown Library is closed.
ACU’s Tuesday night basketball doubleheader at Angelo State in San Angelo was postponed until Thursday night, starting at 5:30 p.m.