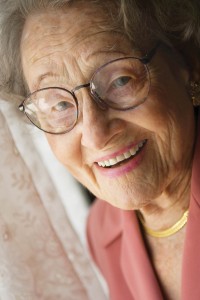 Martha Miller Palmer, one of Abilene Christian University’s oldest graduates at age 104, died Dec. 15 in Houston.
Born in Corsicana, Texas, in 1906 – ACU’s founding year – she attended Abilene Christian on its North First Street campus with her older sister, Louise, and graduated in 1931 with a degree in home economics. She married A.B. “Swampy” Palmer in 1935, and worked as a dietician in the Houston Independent School District. Among her survivors are two daughters, Nancy (Palmer) Edelmon and Diane (Palmer) Andrews; five grandchildren and 10 great-grandchildren.
Palmer was profiled in the Winter 2008 issue of ACU Today in an ongoing feature, “One Hundred and Counting,” about Abilene Christian alums who are centenarians.
When asked how life is different since she was an ACU student during the Depression, she replied, “Lots of things have changed. We’ve gone from horse and buggy to having a man on the moon. We used to use the expression, ‘You might as well go to the moon,’ and now we have.”
Her advice to today’s college students: “Take your school seriously. Learn everything you can. This is a golden opportunity for you. And don’t forget that accumulating things on this earth is pretty futile unless you use those things for good.”
To nominate ACU graduates for “One Hundred and Counting,” call 325-674-2690 or email hadfieldr@acu.edu.