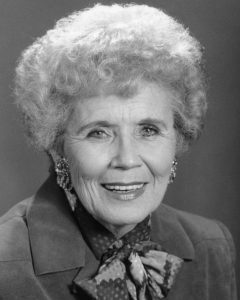 Patsy Powell Duncan (’46), the first woman to serve as a vice president at Abilene Christian University, died Dec. 2 in Amarillo at age 84.
The effervescent and elegant Duncan joined ACU after a career in public school teaching and administration that saw her serve as president of the Texas State Teachers Association, and later as TSTA’s director of professional relations. She also was the first teacher at Amarillo Christian Schools.
Duncan joined the Abilene Christian staff in 1985 as an estate planning counselor, becoming director of planned giving in 1986 and assistant vice president for development in 1987. ACU’s ninth president, Dr. William J. Teague (’52), appointed her vice president for development in August 1989. Duncan retired in 1995.
Her ACU undergraduate degree was in theatre, fostering Patsy’s lifelong love for the dramatic arts.
Memorials can be made to the John and Patsy Duncan Endowed Scholarship Fund at ACU or the Blanton Center at High Plains Children’s Home in Amarillo.
More on Duncan’s life can be found here.