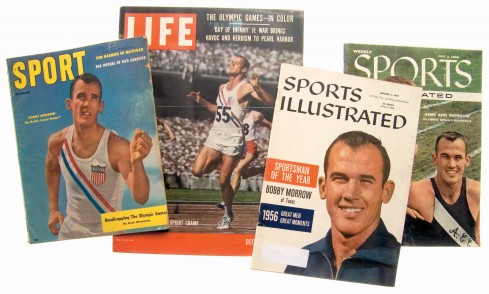 Sports Illustrated unveiled its special issue Nov. 30 honoring the magazine’s Sportsman of the Year, Super Bowl champion quarterback Drew Brees of the New Orleans Saints.
But the magazine’s website also shows a collection of the 56 covers celebrating its annual honorees, including the January 1957 issue saluting Abilene Christian University student Bobby Morrow (’58), who won three gold medals in November 1956 at the Olympic Games in Melbourne, Australia. The covers reveal a who’s who of the sports world.
To put this honor in perspective, Morrow was voted 1956 Sportsman of the Year over a galaxy of superstars of his day, including Mickey Mantle (New York Yankees slugging outfielder), Don Larsen (also of the Yankees, who pitched the first World Series no-hitter in 34 years and the first-ever perfect game in that event since it began in 1903), Floyd Patterson (at age 21, the youngest-ever heavyweight boxing champion of the world), Frank Gifford (New York Giants’ halfback who was named MVP of the NFL), and Paul Hornung (Heisman Trophy-winning running back from Notre Dame University).
Morrow’s Olympic heroics were performed while he was just a Wildcat sophomore. A must-see compilation of his three Olympic races can be seen here.
You can read SI’s profile of Morrow here.