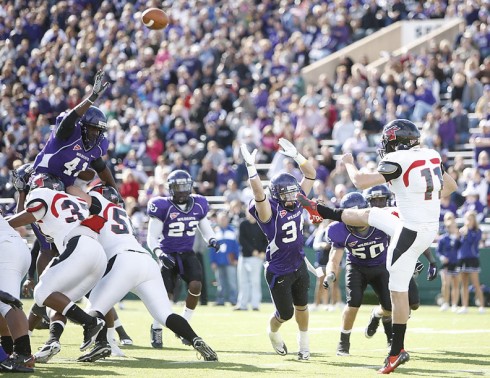 The sports section headline in Nov. 28’s Abilene Reporter-News was frank, but nonetheless accurate: BLACK SATURDAY
It had nothing to do with the stock market nor the state of global affairs, but a day (Sept. 27) when the post-season playoffs for football teams from three high schools and one university in Abilene came to a screeching halt.
Abilene High School, Abilene Cooper High School, Abilene Christian High School and Abilene Christian University all fell in games Saturday that ended their promising seasons.
ACU’s game with the University of Central Missouri was a showdown of two quarterbacks – the Wildcats’ Mitchell Gale and the Mules’ Eric Czerniewski – who are finalists for the Harlon Hill Trophy as the top player in NCAA Division II.
UCM’s senior signal caller prevailed, as did his team, in a 55-41 game whose outcome was in doubt until the final minutes. ACU spotted the fast-starting Mules to a 21-0 lead and a 29-point head start before rallying to make the score 35-34 early in the fourth quarter. UCM outscored the Wildcats 20-9 the rest of the way to take the win and advance to a Dec. 4 national semifinal game with ACU playoff nemesis Northwest Missouri State. Gale, a sophomore, threw for 358 yards and five touchdowns but Czerniewski, a senior, was even more spectacular with 477 yards and six TDs.
Kudos are due to fans of both teams – 6,455 of them in Shotwell Stadium – who represented the second-best attendance total among seven other playoff games that afternoon. The turnout was admirable in that students from both universities (about 11,000 from UCM and 4,700 from ACU) were out of school for the long Thanksgiving holiday. Good crowds in Shotwell for the playoffs are no fluke: in 2008, ACU hosted first- and second-round games that drew about 20,000 people total, the best mark in the nation.
Thanks, too, to ACU’s Big Purple Band, which set aside its leftover turkey and dressing sandwiches and shortened its holiday weekend to put on a spirited show in the stands.
ACU’s 2010 season ended with disappointment, but you’d have to look back 33 years to find a better one. The Wildcats won their last national football title in 1977 (with an 11-1-1 record). The 2008 team finished 11-1, not falling until the second round of the playoffs, but this year’s team notched the first 11-0 regular season in university history.