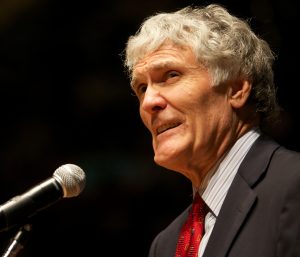 Fifty years after becoming the youngest U.S. track and field athlete to win a gold medal in the Olympics, Earl Young’s accomplishment was honored again by Abilene Christian University, his alma mater.
Young (’62) ran the second leg of the winning 1,600-meter relay that set a world record (3:02.2) in the 1960 Olympic Games in Rome, and brought his medal with him to campus Nov. 17 to share with current ACU student-athletes during a meeting in the same Elmer Gray Stadium locker room where Young once prepared for competition as a Wildcat.
The 69-year-old Dallas businessman was honored in Chapel and at a luncheon afterward in the Hunter Welcome Center. He was joined by Jack Yerman, one of three American quartermilers who teamed to win gold with Young. It was the first time the two had met since 1960.
Young was inducted into the ACU Sports Hall of Fame with the 1989-90 class.