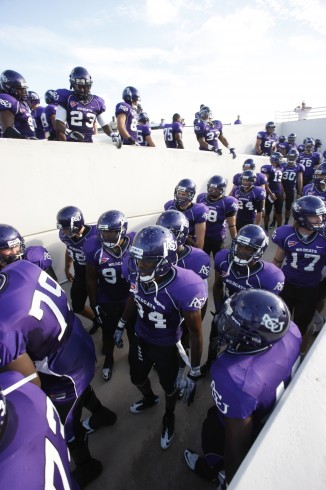 The last time Abilene Christian University won a national championship in football, they played in Seattle’s Kingdome, gas cost 65 cents a gallon, Jimmy Carter was president, the World Trade Center in downtown New York City was brand new, and NASA tested its first Space Shuttle.
Fans of the Wildcats who remember those days may draw some similarities between the 11-1-1 team that won the NAIA Division I title in 1977, and this year’s version, which is 11-0 and hosts a second-round game today at noon in Shotwell Stadium with the University of Central Missouri.
While returning some talented players, expectations of the 1977 team were not extraordinarily high. The 1976 Wildcats were actually more primed for post-season success, with seniors galore in the offensive skill positions: quarterback Jim Reese, tailback Wilbert Montgomery and wide receiver Johnny Perkins. Montgomery and Perkins went on to success in the NFL.  And there was a newcomer to the kicking game, senior Ove Johansson, who played college football for only one season, just long enough to boot a world record field goal of 69 yards and earn himself a shot at the NFL as well. Head coach Wally Bullington made 1976 his last year, and his team finished 9-2, runner-up in the Lone Star Conference, earned a spot in the first-ever Shrine Bowl in Pasadena (Texas, not California), where it defeated Harding University.
The 1977 team – like 2010’s – featured relatively inexperienced underclassmen in the offensive skill positions: an all-sophomore backfield of quarterback John Mayes, tailback Alex Davis and fullback Kelly Kent; a speedy senior wide receiver headed for the NFL (Wilbert’s brother, Cleotha); and a senior-laden defensive unit led by linebackers Ray Nunez and John Usrey, defensive back Chuck Sitton and lineman Mike Lively.
That group had a rockier road to the national title game, including a still-debated 25-25 tie with Texas A&I down in Kingsville, and a 21-14 loss the following week at home to Angelo State. But it bounced back to win seven straight, including its 11th game in the inaugural Apple Bowl in Seattle, for the four-foot tall NAIA national  championship trophy.
The 2010 team is two seasons removed from the offensive juggernaut that rewrote the ACU record book (and scored an NCAA playoff record 93 points in one game). It was led by senior quarterback Billy Malone, running back Bernard Scott and wide receiver Johnny Knox. Scott plays for the Cincinnati Bengals and Knox is the leading receiver for the Chicago Bears.
This year’s team won its 11th two weeks ago against Southwestern Oklahoma State – the same Bulldogs the 1977 Wildcats defeated in Seattle to top off their season.
It has a sophomore quarterback (Mitchell Gale), and major contributions from freshman running backs (Charcandrick West and Darrell Cantu-Harkless), and a stout defense with senior leadership (linebackers Kevin Washington, Eric Edwards, Courtney Lane and Fred Thompson). There are no world record field goals this year (Johansson still holds that mark), but Spencer Covey is a weapon in another respect, among the nation’s leaders in recording touchbacks on kickoffs. And speedy senior wide receiver Edmund Gates looks to be headed for a shot at a full-time job in the NFL.
To win another national title, the Wildcats will have to prevail in the first of three games in the NCAA playoffs, starting today. If they win today, they are guaranteed a home game next Saturday. Another win would put them in the national semifinals (on national TV), and a third would land them in Florence, Ala., the site of the title game (also nationally televised).
Wildcat fans have their hopes high and their fingers crossed, and a few still have an old T-shirt or coffee mug from the bookstore in the closet to signify the last time ACU reached one of the pinnacles of small-college football.