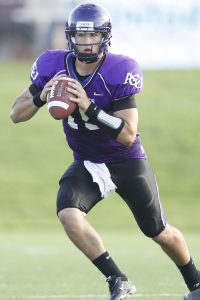 Abilene Christian University’s 11-0 and No. 2-ranked football team is powered this season by a high-scoring offense, and two of its leaders have impressed voters for major awards soon to be announced.
Sophomore quarterback Mitchell Gale, a native of Alva, Okla., is one of nine national finalists for the Harlon Hill Trophy, which recognizes the top college football player in NCAA Division II. Gale has thrown 33 touchdown passes and only two interceptions in ACU’s banner season, which continues this Saturday when the Wildcats host No. 8-ranked University of Central Missouri at noon in Shotwell Stadium.
He is only the third ACU student-athlete to be a finalist, following quarterback Rex Lamberti in 1993, and running back Bernard Scott (2007 and 2008), who won the Hill Trophy as a senior in 2008 after finishing second the year before. Scott currently plays for the NFL’s Cincinnati Bengals.
One of Gale’s sturdy protectors is senior right tackle Trevis Turner of DeSoto, Texas, who has been named a national finalist for the Gene Upshaw Award as the nation’s top lineman in NCAA Division II. The 6-7, 335-pound Turner is the fourth Wildcat in the last five years to be a finalist. ACU center Sam Collins won the award in 2008.
The Upshaw Award honors former Texas A&M-Kingsville great Gene Upshaw, a six-time National Football League Pro Bowl selection who played 16 years with the Oakland Raiders before becoming executive director of the NFL Players Association. Upshaw, who died in 2008, was inducted into the NFL and College Football halls of fame.
The Harlon Hill Award will be announced Dec. 17 and the Gene Upshaw Award is announced following the 2010 season.