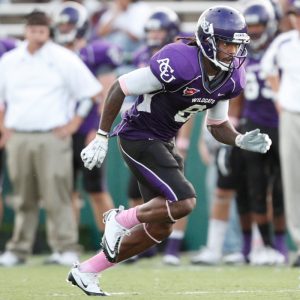 Edmund Gates knows something about transformations. Today he has a key role in a different one.
Four years ago, the senior from Vernon, Texas, followed his cousin, Bernard Scott, to Abilene Christian University. Unlike Scott – a heralded talent on the field and now a running back for the Cincinnati Bengals – Gates had never played football in high school. He walked on to the Wildcat practice field for a tryout and head coach Chris Thomsen (’00 M.Ed.) gave the speedy young former basketball player a chance.
Four years later, the 24-year-old Gates is the one of the top wide receivers in the nation for the No. 4-ranked Wildcats, and a prospect for the NFL Draft next spring.
Yesterday, he saw his father, Edward, for the first time in 15 years, when the latter was released from the French Robertson Unit of the Texas Department of Criminal Justice near Abilene.
Brandon Tripp of The Optimist and Joey Richards of the Abilene Reporter-News wrote accounts of the reunion in today’s editions.
“I’m really, more than anything, just happy that he’s got his dad,” Thomsen told the Reporter-News. “I know this Christmas will be a special Christmas. He’s talked about that already. He shared that with our team. I think amongst a pretty special season that we’re having right now, I think this is a special story and two very special people. I’m overwhelmed and glad to be a part of it.”
Edward Gates is expected to see his son play for the first time when the undefeated (7-0) Wildcats host Angelo State in a Lone Star Conference game Oct. 30.