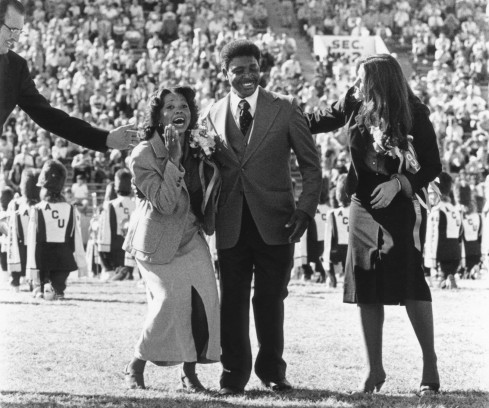 In 1979, Evelyn Lynette Howard became the first African-American to be chosen Homecoming Queen by her fellow students at Abilene Christian University. In this classic moment from halftime at Shotwell Stadium, she reacts to hearing her name announced to the crowd. She was escorted by her late father, T.R. Howard.
Lynette is a native of Ferris who now lives in DeSoto and is principal of J.P. Starks Math, Science and Technology Vanguard in the Dallas ISD. She earned a degree in physical education from ACU in 1980, and has served in various teaching and coaching roles in school districts around Texas.
At ACU, Lynette was a twirler with the Big Purple Band, a member of GATA women’s social club, intramural student director, and participated in Summerstage.