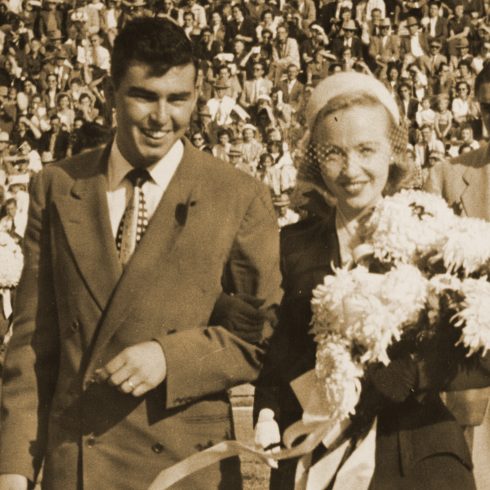 In honor of Abilene Christian University’s 2010 Homecoming week, we present the first installment of what we’ll call Queen for a Day, a nod to the popular 1940s-1960s radio/TV show hosted by Jack Bailey that paved the way for today’s reality TV phenomenon.
ACU’s Homecoming starts Thursday, Oct. 7 with the annual Gutenberg Dinner, and runs through Sunday afternoon, Oct. 10, when the last act of the five-time Tony Award-winning musical, Titanic, sinks behind the curtain of the Abilene Civic Center.
Monday’s Queen for a Day comes from Homecoming 1952, when Marianna Yarbrough was crowned. Fifty-eight years later, you know her as Dr. Marianna (Yarbrough ’53) Rasco, professor and chair emerita of family and consumer sciences. She was escorted in this photo by a young Dr. Clyde Austin (’53), who is now the Robert and Mary Ann Hall chair and professor emeritus of psychology. Clyde is married to Sheila (Hunter ’53) Austin and Marianna is married to Ken Rasco (’48), assistant professor emeritus of English and registrar. The Rascos and Austins still live in Abilene and attend University Church of Christ.
The photo was taken on the field at Fair Park, the former home of the West Texas Fair and Rodeo and where the Wildcats played football until Shotwell Stadium opened in 1959. Fair Park was situated where Rose Park is today in Abilene (near South 7th Street and Barrow).