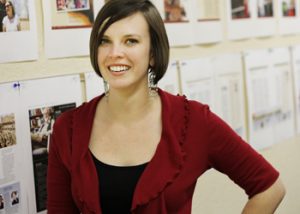 Katie (Noah ’06) Gibson, associate editor of ACU Today magazine, leaves us after today to accompany her husband, Jeremiah (’07), to Boston, Mass., as he takes a new job in his marriage and family therapy career.
She got her start in Creative Services as a student editorial assistant late in her undergraduate career, which coincided with our preparations for Abilene Christian University’s Centennial. An English major, she served as research coordinator for Dr. John’s Perpetual Calendar, one of our major commemorative products from that special year and a tribute to ACU’s eighth president and resident historian, Dr. John C. Stevens.
After earning a master’s degree in English studies from Oxford Brookes University in Oxford, England, in 2008, Katie returned to Abilene, and began as our writer/editor in January 2009. Her responsibilities for the magazine included writing EXperiences, news pages and major features such as the cover story (“A Semester to Last a Lifetime”) for our Fall 2009 issue. She also taught freshman classes part time in ACU’s Department of English.
It makes us feel better to know that instead of losing a wonderfully talented writer/editor, we’re gaining another great freelancer as a result of her and Jeremiah’s move to Beantown. Look for Katie’s byline on even more ACU Today content in the future.