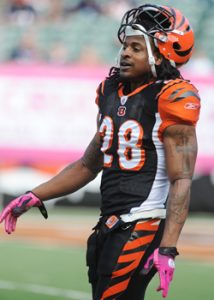 A boyhood dream of former Abilene Christian University football standout Bernard Scott may come true Sunday, Aug. 8, when the Cincinnati Bengals play the Dallas Cowboys in the NFL’s Hall of Fame game (8 p.m. EDT on NBC).
A fine article by Geoff Hobson on the Bengals’ team site takes a look at Scott’s longtime wish to meet former Dallas all-pro running back Emmitt Smith, if Wildcat fans can overlook Hobson’s references to “tiny Abilene Christian” and Scott scoring seven touchdowns in a game in versus “some place called West Texas” (ouch, fans of the rival WT Buffs). Scott grew up in Vernon, Texas, and idolized Smith, who helped the Cowboys win three Super Bowls and is the current NFL career rushing king.
The annual preseason game played at the NFL Hall of Fame in Canton, Ohio, will feel like a home game for the Bengals. But it also has special meaning for the Cowboys, who will see Smith inducted on Saturday into the NFL Hall of Fame. Both teams have legitimate Super Bowl aspirations in the upcoming season.
Scott is beginning his second year in the NFL after a solid rookie season in 2009 when he backed up veteran Cedric Benson and returned kicks for Cincinnati.