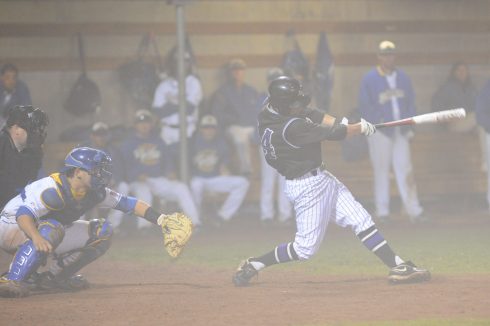 With fog oozing from the soggy turf – thanks to five days of drenching rains in Warrensburg, Mo. – sophomore infielder Ryan Luckie delivers the go-ahead single in the top of the 13th inning to propel the never-say-die Abilene Christian University Wildcats to a thrilling 9-8 win over St. Mary’s in an elimination game of the 2010 NCAA Division II South Central Region tournament late Monday night. For more on the marathon game, which pushed ACU into another win-or-go-home showdown beginning at 12:20 a.m. Tuesday with University of the Incarnate Word, see this story.  The Wildcats rallied from an early 6-0 deficit to tie the Rattlers and force extra innings, with the teams playing more than four hours before the game was eventually decided.
In the nightcap – what else do you call a game that begins after midnight and doesn’t end until after 3 a.m. – ACU outlasted Incarnate Word, 9-4, to earn a 2 p.m. game Tuesday with No. 1 seed and tournament host Central Missouri.
The six-team regional tournament, whose winner advances to the NCAA Division II version of the World Series May 22-29 in Cary, N.C., has experienced multiple delays and postponements because of heavy rain since it began May 13.
Follow the Wildcats’ here and here as they attempt to make their first trip to the national tournament since 2003.