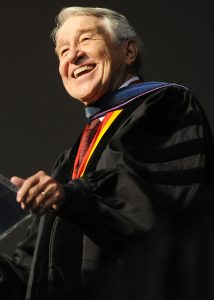 There is a nice profile of the irrepressible Dr. Jack Scott (’54), chancellor of the California Community College system, in the Fall 2009 issue of Affinity magazine. Scott, who was appointed by Governor Arnold Schwarzennegger, leads an organization of 109 colleges serving 2.6 million students.
As a former state senator, he was chair of California’s Senate Education Committee and the budget subcommittee on education.
Scott was named Abilene Christian University’s Outstanding Alumnus of the Year for 2002, and the keynote speaker at his alma mater’s Opening Assembly in 2008.
“We are responsible to God – that’s your primary responsibility,” said Scott in his Opening Assembly address in Moody Coliseum. “The very essence of Christianity is that you are called to serve … regardless of the occupation you choose. The truth is, every occupation should be a ministry. Serve, serve and serve again.”
Scott, who will turn 77 in August this year, continues to model that advice every day.