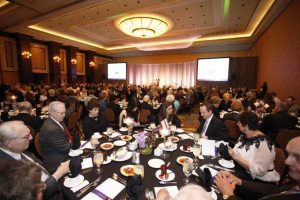 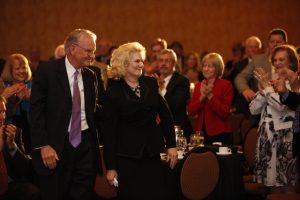 Friends, colleagues and former students of Dr. Royce (’64) and Pam (Handy ’65) Money gathered in the Dallas and Fort Worth metroplex Tuesday night to honor Abilene Christian University’s 10th president and first lady. The dinner event, held at the Gaylord Texan Hotel and Convention Center in Grapevine, featured tribute speakers and a film, and was a sellout.
“Royce and Pam had to be talked into these events,” said tribute speaker and ACU trustee Sharron Owen Drury (’72). “They finally decided there was one way they could do it, and they choose to see this as their opportunity to come and to appreciate us: those of us who have supported them and loved them, and been a part of the work they have done,” Drury said.
“He is a humble man with a pure heart, and he has been blessed by God,” said former classmate and ACU Board of Trustees chairman Don W. Crisp (’64), a tribute speaker who called Royce “a dream to work with because of his collaborative, inclusive style of leadership” as president.
Crisp said Royce and Pam have been a committed team. “All of the important accomplishments of the Money administration are the result of the combined efforts of this dedicated couple. … Leaving the presidency will allow them to do what they do best: building relationships and touching the lives of people,” Crisp said.
Nineteen-year-old sophomore communication major Hailey Clinton presented a humorous “Top 10 Reasons Why Students Love Royce Money,” and noted that “he has been president my entire life.”
“Our hearts overflow with gratitude tonight, and it’s a night we will always remember,” Royce said. Pam said they have been asked repeatedly through the years about what it has been like to leave a ministry career so her husband could become ACU’s 10th president, but their reply was always, “We never left.”
Other dinner events in the series will continue in Houston (March 26); Lubbock/Amarill0 (April 1); Austin (April 8); San Antonio (April 10); Temple/Belton/Waco (April 22); the ACU campus (for faculty and staff April 27); Atlanta, Ga. (April 29); Nashville, Tenn. (May 1); southern California (May 6); and Abilene (May 20).
Information about tickets and table sponsorship opportunities can be found here. A special tribute publication distributed at the events can be viewed here. Highlights of the metroplex event can seen in the following video: