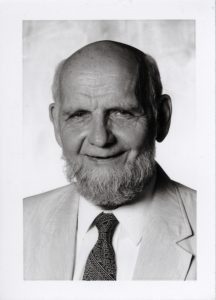 The 101st meeting of the Texas Folklore Society is coming to Dr. George Ewing’s neck of the woods in early April 2010, but he won’t be here – in Abilene – to help host the colleagues he loved spending time around.
Ewing, 87, died Feb. 9, leaving behind a colorful 37-year career of teaching at his alma mater, and former students he amazed with his literary expertise, singing, infectious laugh and feats of physical strength.
I kept few textbooks or notes from my days as an ACU undergraduate. Communication Law was one (thinking Dr. Charlie Marler had another nerve-wracking test out there for which I needed to prepare).
Another was Ewing’s rollicking American Folklore course for upperclassmen, which may have been the most fun I ever had working for a grade. He seemed to relish each class period, speaking without notes and enjoying teaching each lesson more than the previous one. At times, he reminded me of my father’s favorite stand-up comedian, the late Red Skelton, in the way he became tickled at what his mind was telling him to say next … a moment when the laugh couldn’t wait for the punchline to exit his mouth.
He was a serious scholar about often whimsical subjects. “Folksy, But Devout, Bookkeeping,” was the topic of his last presentation to the Texas Folklore Society’s annual meeting in 2005. I am no accountant, but would have stood in line to hear that one.
Balding but heavily bearded, he didn’t look the part of an exercise fanatic, but his feats of stamina were legendary among those who knew him. In the late 1970s, I recall a photo of him doing chin-ups with a 50-pound free weight tied to his waist. He enjoyed gymnastics, weight lifting and hiking long distances.
His obituary can be found here.
In T for Texas: A State Full of Folklore, Francis Edward Abernethy wrote this about the Texas Folklore Society, an organization for which Ewing served as president in 1995-96:

“ … Texas really is the folklorist’s happy hunting ground, that we have all the fields we can ever plow, and that the work and the room to work is as wide as its borders and as inexhaustible as the winds that blow across the Staked Plains. And this work should be done by those who know the land and love it and understand it.”

Dr. George Ewing loved the folklore and legends, handed down from generation to generation, of the Lone Star State.
Perhaps the greatest honor would be to include him – a bigger-than-life fifth-generation Texan who enlivened ACU English classes for nearly four decades – in them. 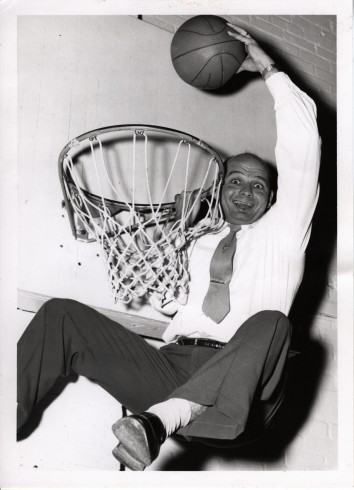