Home/ ACU News/ Sports/ Batter up, brethren
Main Content
Features Academic News Alumni News Campus News ACU Online All Categories
Academic News ACU News ACU Online ACU Remembers Alumni News Campus News Faculty Spotlights Features Graduate Programs Research Sports Student Experience Student Spotlights Student Success Undergraduate Programs Why ACU?
Forget Punxsutawney Phil, the over-hyped rodent who gets all that media attention for predicting the demise of winter. In early February, the surest signs of approaching spring – at least in this part of the world – are the ping of aluminum bat meeting ball and the glow of lights in the nighttime sky from Crutcher Scott Field.
Today was Opening Day for the Wildcat baseball team, which has high hopes of continuing its dominance of the Lone Star Conference, earning another spot in the NCAA Division II South Central Region tournament and perhaps making ACU’s second appearance in the World Series.
Abilene Christian’s rare opponent to begin the 2010 season is Harding University, its sister school from Searcy, Ark. The Bisons are here for a pair of doubleheaders this weekend, with the next one Sunday at 12:35 p.m., about half an hour after most morning sermons end around town.
ACU tagged Harding with two losses today, rallying for a 16-9 win in the first game and edging their brethren in the chilly nightcap, 6-5. In the opener, head coach Britt Bonneau’s team scored eight runs in the sixth inning, and in the second game, came back from a 5-2 deficit for the victory. Centerfielder Aaron Oliver, a transfer from East Los Angeles College, swiped three of ACU’s seven stolen bases in the first game. Rightfielder Cameron Bankston threw out a Harding runner at the plate for the final out of the second game, with preseason all-America relief ace Brad Rutherford earning the save.
The only meeting in football came in the 1976 Shrine Bowl in Pasadena, Texas (near Houston). That year, the Lone Star Conference and Arkansas Intercollegiate Conference agreed to send their runner-up teams to a bowl game, and few expected the pairing to be two church-related schools with a habit of avoiding each other on the gridiron.  ACU was loaded with senior talent, including wide receiver Johnny Perkins (drafted into the NFL a few months later in the second round by the New York Giants), running back Wilbert Montgomery (who did not play while resting from a thigh injury, chosen in the fifth round of the NFL draft by the Philadelphia Eagles), and world record field goal kicker Ove Johansson (who played briefly in the NFL for Philadelphia and Dallas).
ACU prevailed in what turned out to be a testy game, 22-12, but the two schools have never played a down of football on the same field since. 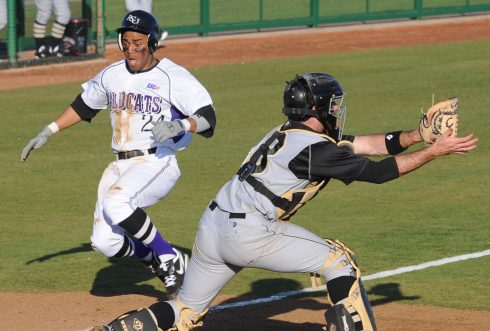