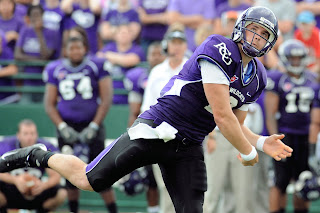 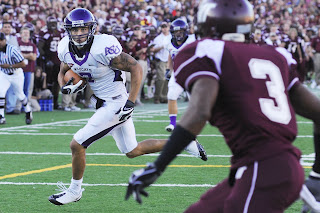 The Wildcats are 10-0, champions of the Lone Star Conference, the No. 1-ranked team in NCAA Division II’s Super Region Four (and No. 2 in the nation) and hosts of the next two rounds of national playoffs if they continue their winning ways in the postseason.
They are among national leaders in several offensive and defensive statistics, powered by a trio of record-smashing seniors [and NFL prospects] – quarterback Billy Malone and wide receiver Johnny Knox [pictured here], and running back Bernard Scott [see photo on post about Gerald Ewing earlier today].
You can follow the team on acusports.com each day, or by following the posts at acusports.blogspot.com.
Get your purple on and come to Shotwell Stadium, starting Saturday, Nov. 22, for the first of what could be several exciting playoff games hosted by ACU. Because of the Wildcats’ sterling record and ranking, the road to the semifinals goes through Abilene and could lead to the national championship game in Florence, Ala., Dec. 13.
Coach Chris Thomsen’s team is being called by some longtime college football observers the most talented and exciting offense in NCAA Division II history. You’ll be kicking yourself if you miss the show.